The Battle of Lexington and Concord - American Battlefield Trust Video
May 01, 2020

The Battle of Lexington and Concord is unquestionably a well known historical event. There’s no shortage of people who talk about it, discuss the tactical specifics of the battle, and even hold the event itself in reverence. After all, as it says in the video posted below (made by the American Battlefield Trust), after the fighting that day: “nothing has been the same on this planet” since. This is true; the engagement is so important, that Historians themselves have a completely different name for the battle than the general public does; this does not happen often -- usually Historians and the public call battles exactly the same things. However, in this case Historians refer to that engagement, not as the Battle of “Lexington and Concord,” but as the battle of “April 19th” (with 1775 being the year attached to that date there in their name for it, even though they generally refer to it without the year). This is fascinating (independent of the event having two separate names), since it’s already the case that very few major events in world history are named using just dates alone and nothing else; a well known example is “9/11,” this event is named for only its date. So, if you referred to that action in 1775 as the battle of “April 19” to a Historian -- they might in fact be very impressed.

However, the previous being said, when talking about the battle up front it’s important to discuss how absolutely deadly and desperate it became for those fighting it – not for the Americans that day, but for the British. For their own safety during the military affair, the British were counting on the numerical superiority of their soldiers, and the superiority of the training and tactics imparted on their men as compared with the Massachusetts forces. This did not hold. The first military encounters that April morning were at Lexington Green (with Captain John Parker commanding the American soldiers) and then at Concord. After fighting happened in those places, the British departed back towards Boston and were ambushed by an American army of upwards of 20,000 soldiers (some Historians say the numbers were actually higher). For the British, even with their superior tactics, discipline, experience, and training, there was no hope of stopping this to due to the problem of numbers alone. And, then as the American Battlefield Trust puts it – “it [devolved] into a running battle.”

Since the British were so badly outnumbered (literally by over 10,000 armed men), they then had to retreat as quickly as they could back to the safety of Boston, this was their only option, but it was no easy feat, and that puts it very mildly – the safety of the city (and Boston itself was the only place they would be safe in Massachusetts, as the countryside was very much not) was 20 miles away and they had to cover this distance on foot under heavy fire as quickly as possible (again, no easy task). However, to be sure they tried as musketballs reigned in on all sides from the Massachusetts irregular guerrilla fighters that comprised their militia. Since they were not fighting “in line” using European style combat, the British didn’t hold any advantage over the colonials as they usually would, in fact it was the opposite, since the Massachusetts militiamen were already conditioned to use the irregular combat tactics that comprised this “running battle,” as the British frantically tried to make it back to Boston and their situation became more and more desperate. For some British soldiers exhaustion and dehydration began to set in, while they worked to cross the terrain and cover the amount of ground needed to escape back to their destination.

While the British did make it back to Boston in the end, the battle (or more accurately the “running fire fight,” as it was not a fully pitched battle in the traditional European sense) had done enormous damage to the British column. It’s the case that not all the English soldiers made it, and in turn minimal damage was done to the American forces, who then proceeded to surround Boston (using their high numerical advantage) and “bottle up” the English inside the city. The British remained holed up there through the battle of Bunker Hill up until George Washington placed his artillery over Dorchester Heights. This action by Washington directly threatened the British Army in Boston once again, but now what’s worse, the lead Admiral from the British Navy in the Harbor indicated that his fleet of ships were now also vulnerable from Washington’s cannons. The British simply could not accept the idea of any damage to their Navy. The English soldiers who had suffered through the battle of Lexington and Concord (what Historians call the battle of “April 19”) then sailed away as the British totally evacuated the city of Boston under threat. The British Navy felt this was the right call – but in any case without their ships in the harbor, the British could not support the army at all holding the city of Boston for England. There would not be another engagement between the two sides of any kind in the war until the British Navy returned to New York City with the army again (aboard ship) en masse after being reinforced. They then attacked, captured, and held New York City and defeated the Americans there.

The American Battlefield Trust has made a video about the Lexington and Concord Battle and there’s a link to it below. In it, presenter Jim Percoco attempts to take apart the specifics of the battle and does a fine job presenting the harsh realities the British soldiers faced as they raced back to Boston and faced down this losing hand that April of 1775. In so doing, the British lost the first battle of the Revolutionary War, and, just as he says – nothing in the world has ever been the same since.

The American Battlefield Trust Lexington and Concord Video can be found here. 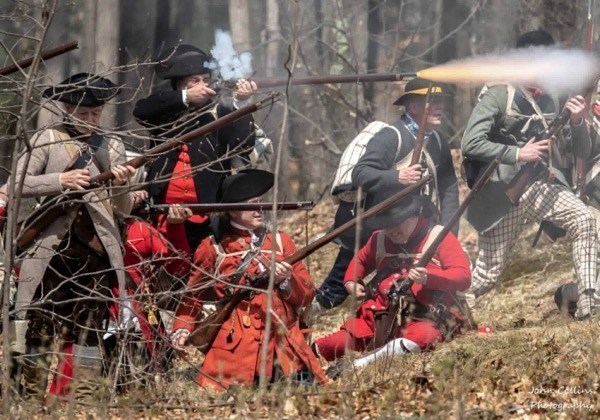 I am a big admirer of the American Battlefield Trust. I think they do very important work, and as such they have also made some amazing (and informative) “cool” American History videos. Though I would compliment the work they do, and think this particular video about Revolutionary War Combat is great and worth watching, I disagree with the presenter on several key points. The video makes the argument that Revolutionary War combat tended to be the same on both sides, and that it’s a myth that the British always fought in “lines” and in reverse also a myth that the Americans always used gorilla-style combat. The idea is, or so it’s stated, that both the Americans and British fought in battle lines and that combat tended to be pretty “static” in that sense between the two sides.

That argument is slightly wrong. While it’s correct to say (for example) that the Americans used traditional 18th century style combat maneuvers during the battle to control New York City (for example, and that is correct to say), in some of the battles immediately preceding they did not and did not intend to use standard combat methods. The Battle of Lexington and Concord (also sometimes called the “Battle of April 19th”) is an example – that battle was won using guerrilla warfare. Also, at the battle of Cowpens (again, for example), not only did the Americans use a form of guerrilla warfare, but revolutionized and refined guerrilla combat as a tactic (one could argue), even legitimatizing it to an extent and a workable (though not necessarily respectable) strategy. There’s no doubt the video below is interesting, but keep in mind, the true nature of revolutionary war tactics, are still debated by Historians, and as such, the opinion in the video (though an interesting opinion), is just one of many on the subject.

This is another great video by the American Battlefield Trust. I have said many times that I am a big fan of their work, and this video is no exception. One myth that I personally try to dispel (independent of the video) when I talk about the Revolutionary War has directly to do with Paul Revere, and this video touches on it. When Paul Revere put a lantern up in the Old Boston Church (one if by land, two if by sea, as the poem goes), he did it as part of an actual military maneuver to warn the Patriot forces about the coming British operation against the town of Concord in Massachusetts (the original military intention of which by the British was to seize an arms store, these arms and munitions were very directly important to the Patriot cause, especially since gunpowder was in extremely short supply). But this isn’t really what school-children are taught, they’re taught to tend to think of the Paul Revere story as a bit of an American “fairy-tale” but this is not what it was, it certainly was what is now known in modern times as an “intelligence” operation, that had an absolute definable, and important military goal, and therefore was part of a military operation. The class poem, which is read in the video, overshadows a very important part of American history (and again the video says that, which is great). The video also correctly points out that there was more than one rider, and mentions that history might be very different if William Dawes (another rider that night), had been mentioned in the classic poem, and not Paul Revere. Check out the video below.

Share this :
September 28, 2015
What was Massachusetts Really like before the American Revolution? Professional Historian and Political Scientist Bryan Fitzmartin, shows us:

Announcing a new free Ebook from from Bryan Fitzmartin.  Download, "America, One Nation, Under Heavy Divide," today for a fun, interesting, and exciting read.

https://store.kobobooks.com/en-us/search?query=bryan%20fitzmartin&fcsearchfield=author
September 28, 2015
What did Americans Really Sound Like Before the American Revolution? Professional Historian and Political Scientist Bryan Fitzmartin, shows us.

Announcing a new free Ebook from from Bryan Fitzmartin.  Download, "America, One Nation, Under Heavy Divide," today for a fun, interesting, and exciting read.

https://store.kobobooks.com/en-us/search?query=bryan%20fitzmartin&fcsearchfield=author
December 18, 2014
User Submitted Question: Who would you consider an underrepresented figure, in the decision to separate from England? A character who did play a part but was never given much press? Professional Historian and Political Scientist, Bryan Fitzmartin, answers for us on youtube, through the link below.

Announcing a new free Ebook from Bryan Fitzmartin. Download "America, One Nation, Under Heavy Divide,"  today for a fun, interesting, and exciting read.
https://www.smashwords.com/books/view/500845
December 18, 2014
User Submitted Question: Was no taxation without representation the major cause of the rebellion? What other grievences did the colonists feel or experience besides no taxation without representation? Professional Historian and Political Scientist, Bryan Fitzmartin, answers for us on youtube, through the link below.